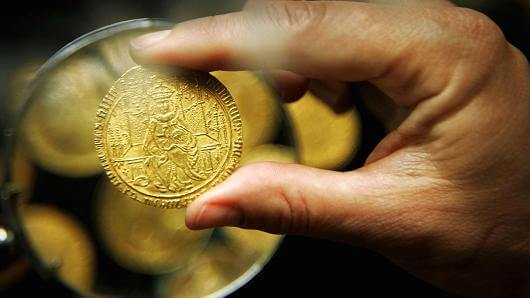 There are countless ways to make coins a part of your investment portfolio. For hundreds, perhaps thousands of years, people have used the metallic value of coinage as a way to store wealth. For modern investors, it is important to make the distinction between coin collecting and coin investing; because the goals and methods of these two diverse activities are quite different.

Coin collectors are well known amassers of all forms of metallic money, as opposed to “currency collectors,” a completely separate category that has more in common with stamp collecting than anything else. Coin collectors, more properly called numismatists, tend to pursue their hobby as a labor of love rather than profit. Most often, numismatists are hybrid creatures, who love the historic side of the avocation as well as its profit potential.

For the most part, however, true “collectors” are more interested in the intrinsic beauty of the pieces they amass, and intend to hang onto their collections forever. Indeed, coin collections are one of the most common items included in family inheritance estates. In times of financial need or emergencies, some collectors will, reluctantly, part with their beloved coins to pay off a mortgage, a college debt, or a medical bill. But they’d rather not.

Coin collecting is a low-profit endeavor

Coin collections, while often quite valuable, tend to be rather poor investments. Annual yields in the range of 1-5 percent are standard; and the average collector who does eventually sell routinely underperforms most other types of investments.

Coin investing can be a high-profit endeavor

Coin investors, on the other hand, tend to do much better than collectors. For one thing, investors get into the game with the clear intention of making a profit. Second, most coin investors are older adults who have spent time learning the trade, so to speak, and tend to be well versed in their specialties.

What “type” of coin investor are you?

Coin investors are of three basic types: those who are more interested in the precious-metal content of the coins they buy; those who care less about precious-metal content and more about the rarity of the coins themselves; and, finally, a mixture of the above two types. The so-called “hybrid coin investor” might purchase several dozen Mexican gold Peso coins at auction one day, and a rare set of Lincoln Cents the next.

It is important to understand what type of coin investor you are, or plan to be, before attending auctions or making large buys. The field is so wide that it helps to know your preferences and decide whether your goal is to become a specialist in one particular niche or to be more of a generalist.

One of the fastest growing niches in the world of coin investing is the precious metals segment. These investors are often former gold and silver bullion investors who want to acquire minted, legal tender coins that are made primarily of those two popular metals.

Some precious metals folks get bored with plain ingots, bars and rounds. They might have always had an interest in coin collecting, or perhaps collected coins when they were young and now want to get back into the hobby from the investment side.

Standardized, known metal content: Using legal tender coins as a surrogate for buying gold and silver has its advantages. For one thing, weight and metallic content is standardized. There’s no guessing about the amount of gold in a 1925 U.S. $20 double-eagle, for example. When you buy one, you won’t need to have it assayed or weighed or appraised (unless it is of exceedingly high value).

Note: Older U.S. gold coinage used the $10 coin, the “eagle,” as a sort of standard measure of value. All multiples and fractions of that amount were given appropriate nick-names, like the $20 double-eagle, the $2.50 “quarter-eagle,” and the $5 “half-eagle.” This usage of the word “eagle” should not be confused with the modern nick-name for one-ounce silver rounds minted by the U.S. government, which are also called “eagles.”

Liquidity: Gold and silver coins are also highly liquid, and can be sold online or at live auctions. There is almost always a ready market for the dozen or so most popular gold coins. Non-rare U.S. gold coins, Mexican Pesos, British Sovereigns and other pieces are among the most common ways for coin investors to amass gold and silver in legal-tender form. For many silver enthusiasts, the ideal form of investing is to purchase U.S. silver dollars minted after WWI.

Bargains: Coin investing is an imperfect market, which is good news for savvy investors who hunt for bargains. Individual silver and gold coins are often sold at distressed prices, meaning the seller is looking to make a quick sale. Typically, buyers who know the market and attend auctions at reputable dealerships can find occasional bargains on such coins.

Many people enter, and then quickly exit, the coin investing niche for all sorts of reasons. Some haven’t done their homework and soon realize that they just can’t afford it. Others lose interest or get stung on a couple of bad buys. Whatever the reason, there are bargains to be had; and eagle-eyed (pardon the pun) investors can do quite nicely.

Ease of ownership: Unlike buying ounces of gold and bricks of silver, coin investing is a simple way to acquire very small amounts of precious metals. Some Mexican Peso coins contain fractions of an ounce of gold, are standardized by weight, highly liquid, and are very reasonably priced. For example, a 1947, 2-Peso Mexican gold coin contains just one-twentieth of an ounce of gold, or slightly more than $60 worth of the metal at current prices.

It’s easy (and yes, fun) to get started: For example, if you want to begin with an investment of $5,000, here is an example of what you could buy, investing half in silver and half in gold: $2,500 worth of U.S. silver coins (their silver content is 90 percent of their weight) like Mercury dimes, Franklin half dollars and pre-1965 Washington quarters: and $2,500 worth of gold Mexican Pesos, French Francs or British Sovereigns.

Please note that the above example is for illustrative purposes only, and is not a recommendation or even a suggestion of what you should purchase.

Beware: Potential pitfalls and how to avoid them

Counterfeiting: Anyone who decides to make a specialty of investing in precious-metal coinage needs to be on the lookout for various scams. For lower-value, silver coins there is not much of a problem with counterfeiting; but fraudulent sellers do appear from time to time in the gold coin niche, especially with higher-value pieces.

Buy from reputable dealers: One of the best ways to avoid getting stung by a scammer is to always buy from a reputable dealer, or another collector that you know well. For high-value coins, it never hurts to have an expert examine the piece to determine its authenticity. Consider the small fee as a very inexpensive form of loss insurance. Most of the larger auctions only allow approved dealers to list items up for bid. Coin shops and independent dealers with a large clientele also tend to be quite safe. Even so, it is always wise to get verification for major buys.

The “rarity” scam: Newer investors and those who aren’t sure what type of coin investing they want to specialize in, typically fall for the “rarity” scam. This bit of subterfuge is something like a standard sales upsell but with a twist. A seller of a U.S. $10 gold eagle, for example, might explain an unusually high price by telling potential sellers, “This is an extremely rare coin. Its value has gone up 300 percent in just the past two years, and it could quadruple in value soon, due to its rarity.”

At times like these, it helps to remember that you are primarily interested in the metallic value of the piece, not its numismatic value. To understand rarity and its related pricing structure is an entirely different specialty. If you are a “metals” coin investor, don’t fall for the “numismatic value” pitch. It is common, and way too many people succumb to it, sadly.

The “ancient coin” scam: There are plenty of wonderful ancient coins on the market, many of which are struck in gold and silver. Roman coins often turn up at auctions and sell quite briskly, particularly the larger pieces that contain high percentages of precious metals. Unfortunately, some unscrupulous sellers will mark these pieces way up with the excuse that “they are ancient, and therefore exceedingly rare.” In almost every case, nothing could be further from the truth.

Base your buying price on gold or silver content: Ancient coins were minted in huge quantities, and numerous large caches have been unearthed in recent times. In fact, many children begin collecting ancient coins due to the low prices of the more common pieces. Roman and Greek coins are fun to collect for anyone interested in history and coins in general. But, don’t be fooled by the “ancient means rare, and rare means valuable” scam. Neophytes to the coin investing world are sometimes duped by such trickery, so remember to buy based on gold or silver content alone, not numismatic value or rarity.

Investing in precious metals by way of legal tender coins is a worthwhile endeavor and is increasing in popularity, especially in these uncertain economic times. For anyone who wants to use coins as a way to own precious metals, the standard warnings apply: do your homework, buy from reputable sellers, and start out slowly. That way, investing in gold and silver coins can be both profitable and fun.