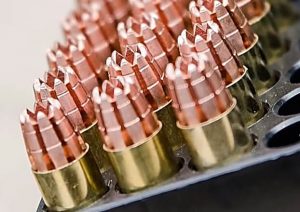 One of the most exciting new wrinkles in the investing world is the weapons and ammunition sector. The beauty of this strategy is in its diversity: there are stocks of well-known gun and ammunition makers, peripheral products like hunting and target-shooting gear, and the more direct, “survivalist” approach of stockpiling ammunition and weapons.

Some alternative and survival investment ideas are one-sided and include either securities (funds or individual offerings from companies in a particular field) or hard assets (like wine, art works and cars). Not to be confused with collectible guns (a separate category of alternative investing closely related to rare coins, stamps and art), weapons investors come in all ages, income brackets and political persuasions.

The Good and Bad of Investing in Guns and Ammunition

Demand is up: Each year, the FBI performs more than 23 million background checks on U.S. citizens who purchase firearms (handguns, rifles and shotguns). That number has been steadily growing each year for the past five years. There is nearly always a spike in gun purchases after mass shootings, for a couple of reasons. Law-abiding citizens fear that government policies on gun ownership will become stricter. Second, people buy for their own safety whenever a dangerous public shooting takes place. Because demand for guns is rising, the market is more liquid and the average price of a used gun tends to rise.

Value holds over the long-term: Like classic cars and fine wine, well-maintained guns tend to hold their resale value or rise in price. Generally speaking, guns are a good investment. In fact, the stock of two large gun-makers has also been going up during the recent gun-buying surge, which makes perfect sense. Both Smith & Wesson Holding Corp. and Sturm Ruger & Co. have been climbing.

Guns serve a double purpose as investments and survival gear: Guns can not only be resold for a profit but act as a first line of defense in times of trouble. Preppers, survivalists, self-defense enthusiasts and alternative investors can look to guns as a very solid buy whatever shape the economy is in.

Gun laws are a patchwork of confusion in the U.S., with each of the states having their own set of regulations about who can and can’t purchase firearms, ammunition and accessories. Investors need to be sure they are on the right side of the law when stocking up on guns and ammo. Otherwise, they could run into serious legal problems with local authorities. Always make sure you have the right to buy and possess any type of firearm and whatever kind of ammunition you intend to acquire.

Some states have strict regulations and statutes about storage and locking of guns in private households. Other localities require extensive background checks and other red tape for buyers. In more than a few states it is nearly impossible for law-abiding, private citizens to obtain conceal-and-carry permits. If you live in one of these areas, be very cautious about transporting guns and ammunition from place to place. Certain paperwork is required even to take guns to shows and sales events in a number of states.

The key legal point is to research the laws in your own state and locality before jumping into a purchase of gun(s) or ammunition. Ignoring the laws, even when you strongly disagree with them, leads to nothing but trouble. It also defeats the purpose of making a profit from this lucrative venture.

For investors who want to put their money into the leading firearm stocks, there are three standouts that most financial experts mention frequently: Smith & Wesson, Sturm Ruger & Co., and Cabela’s. All three are enjoying a good short-term run as gun demand has been steady.

Smith & Wesson Holding Corp.: Smith & Wesson is more diversified than most investors realize, having recently acquired a technologies company that specializes in shooting and hunting accessories. As one of the most successful gun manufacturers in the world, Smith & Wesson is a stable company that dominates its market segment and offers good value to investors who want to take advantage of the growing interest in personal safety and self defense.

Sturm, Ruger & Company: SRC carries little debt and typically has a very positive cash flow from its operations. It often returns cash dividends to shareholders and is a favorite buy for investors who want to take part in the firearms market.

Cabela’s: For a different kind of firearms equity position, Cabela’s is the choice of many investors who want a stake in a company that sells firearms, ammunition and various gun/ammo accessories. For diversity within the sector, Cabela’s offers a well-rounded exposure to all things gun and ammunition-related. Since 2014, the company’s ammunition sales have been steadily improving as consumers returned to their old habit of buying ammo from the retailer. Prior to 2014 ammo sales had stalled due to inventory issues that are now resolved.

Stocking Up on Ammunition, Rifles and Handguns

Note that some investors go the “ammo only” route for stockpiling a hard asset. Gun owners are notorious for running out of ammunition at the worst possible times. That’s why building a large ammunition inventory can be a simple way to cut down on initial costs, storage space and headaches. Investors can usually get good price breaks on large quantity buys, and a safe, secure storage area can be built in a basement or garage with just a small outlay of funds. Investors who go this route choose three or four kinds of ammunition to specialize in and accumulate it over time, as precious metals enthusiasts do with silver and gold bullion or coins.

Other points to keep in mind about buying guns and ammo for investment purposes:

The Final Word on Investing in Guns and Ammo

Survivalist/preppers, as well as alternative investors, can find happiness and profit in the weapons and ammunition niche. Anyone with an interest can get started by purchasing individual shares of stock, an ETF share, or raw ammo and guns. As long as local and federal legal issues are addressed, there is no reason to overlook this lucrative investment arena.